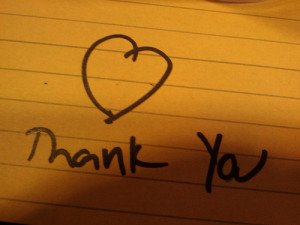 (This is Part 11 of Leadership Principles)

It’s a stupid cocktail napkin when you look at it. It means a lot to me. A whole lot. I have it tacked to the cork board above my desk.

“Q4 losses 7% better than forecast. Nice work. Well done.” It’s scrawled in blue pen and in a couple of spots, it tears through the thin napkin material. Evan wrote it and slipped it to me during a boring lunch meeting.

Evan had only been with the company for a couple of months at that point. He was my boss’ boss. He and I had collectively spent 3 hours together over those few months (enough for him to know who I was and generally that my team and I focused on reducing credit card losses).

The napkin means a lot to me because a guy who I saw as exponentially busier and more concerned with “big” issues took a moment to share confidential information with me (the 7%) as soon as he got it (it came over his Blackberry). Sort of like what I preach in They know what I know. Other managers wouldn’t have shared this – they would have waited until results were officially published. I felt like I was “in the fold.” More importantly, his note acknowledged that I had some role in creating that result and he appreciated the work I had done to achieve it. I was valued by the organization.

A thank you note. That’s all it takes. There are plenty of polls out there stating the one thing employees want more than cash compensation is to be appreciated. To be thanked for their hard work. It only takes a minute (literally) to scratch out a note thanking them for an achievement. It’s even better if that achievement isn’t something huge (like a major project milestone). It’s more powerful if the thank you is for some small thing that would ordinarily go unnoticed in the day to day hubbub. It tells that person “I’m watching the work you do on a regular basis and I know about all the great small contributions you make to make this place more successful.”

I have a small 8.5″ x 5″ notepad with “Memo from Mike Figliuolo” imprinted on the top. It takes me two minutes to write a thank you. When I’m done, I fold it such that the “Memo from Mike Figliuolo” part is exposed and I leave it on the thankee’s chair or stand it up in their keyboard (I make sure they’re not there when I drop it off – it doesn’t have the same effect to hand it to them as it does for them to walk in and find a pleasant little surprise). Depending on the size of the team I’m working with, I’ll write one every 2-3 weeks (writing too many diminishes the effect of receiving one).

I used to do this without realizing the impact these notes had. It just seemed right to do them. One day, I wrote one to my star analyst (Andy) for some small yet meaningful contribution he made the day prior. I left the note on his keyboard as I left the office that night. When he saw me the morning he found it, he held the note up and said “I can’t believe I finally got one. I’ve been waiting a long time for one of these notes.”

“No. You don’t understand. I’ve been waiting almost two years for one of these.”

He saw the puzzled look on my face. I was clearly missing part of the equation.

“Come with me.” he said. He took me on a tour of cubicles in my team’s area. He pointed to notes tacked up on the cubicle walls. There had to be twenty of them. They were all notes I had written just like the one I had given Andy. Up to that point, I had never realized these “silly” little notes meant enough to people for them to save them let alone display them in their work areas. Apparently they meant a lot. Just like the napkin Evan gave me.

“Wow. I never appreciated these notes meant that much.”

“Yeah. They’re important. I’m glad I finally got one. Thanks Mike.”

“No. Thank you. I appreciate everything you do around here.”

Is there someone in your organization who deserves a thank you note? Write it now. Spend the $15 on some memo pads with your name on them (I’m pretty sure you can even deduct it on your taxes as a business expense). Give people what they really want – recognition for a job well done at a personal level.

– Learn more about how to create your own set of leadership principles in my book One Piece of Paper.  Buy your copy here.

Photo: Thank You! by Iain Farrell