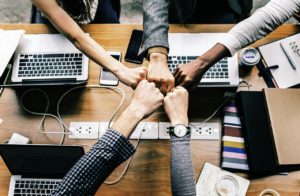 Whether you’re trying to win championships or create the world’s best advertising, hiring people committed to being good teammates is what the best teams do.

Today’s post is by Leo Bottary, author of What Anyone Can Do (CLICK HERE to get your copy).

During my workshops for CEOs and business leaders, I talk about how the same five factors that are common to high-performing peer groups apply to high-performing teams.  These five factors, first outlined in The Power of Peers, essentially involve people, trust, productivity, accountability, and servant leadership.  It’s having excellent people who thrive in a culture that prizes trust, world class results, being accountable to one another, and servant leadership.  In short though, it’s about having people who are committed to being great teammates versus top individual contributors.  Let me share two examples of great teams, one from business and the other from sports.

MullenLowe is a Boston-based advertising agency.  The firm’s logo features an octopus wearing boxing gloves – a different kind of beast, so to speak.  People who enjoy the privilege of working there are surrounded by colleagues committed to one another and to creating great work for their clients.  Picture talented people, all from various backgrounds and walks of life, dedicated to producing award-winning advertising that drives their clients’ business. Let me illustrate what that looks like based on what I experienced during my time with the agency.

The creative director gathers a group of people from various disciplines to come up with ideas for a new campaign for a client or prospect. Everyone on the team shows up prepared – armed with a solid understanding of the client’s business, competitors, market, strategy, and so on. The ideas start flying. Everyone has their boxing gloves on – not to fight against one another but to fight for the strongest idea. Eventually, something takes shape, and the bones of a campaign are displayed on a board. People look at one another and collectively celebrate their genius, realizing that not one of them could have created the campaign alone.  After a short break, they know it’s time to start from scratch and come up with another campaign.

Here’s the best part: on all the occasions I participated in that exercise, the first campaign, which everyone celebrated with such great enthusiasm, never made the cut to show the client.  The deeper they dug as a team, the better the work became.  It’s what happens when you have people who trust and respect one another enough to go to battle for the best idea.

No team at the college or professional level has been more dominant over the past 20+ years than the University of Connecticut’s women’s basketball team. Since 1995, the program has won eleven national championships, played in 18 Final Fours, and owns the longest consecutive game winning streak in the NCAA (Men or Women) at 111 games.  The team’s average margin of victory over the past several years hovers around 35-40 points per game.

Geno Auriemma is a Hall of Fame head coach, who tends to attract the best players in the country.  Other top programs enjoy similar advantages, including Stanford, Notre Dame, Baylor, Tennessee, South Carolina, etc.  So it begs the question:  Why is UConn consistently so much better than everyone else in women’s college basketball?  When I asked UConn Assistant Coach and former UConn All-American Shea Ralph, she told me that, as tough as the coaches are on the players, the players are just as tough on themselves and one another. We talked a great deal about how their culture of accountability was key to setting them apart from other teams.

Consider this: HBO aired a short series on UConn’s program during the team’s march through the 2017 NCAA Final Four. In one of the episodes, the coaches were stranded at their homes because of a severe snowstorm. The team, which included players who had never lost a game during their college career, didn’t skip practice because the coaches couldn’t be there; they trudged across campus through the snow and held their own practice. Their commitment to one another to set their own standard of excellence, and their desire to get better each and every day is what sets them apart from every other program.

There’s another ingredient at work here also, and this factor begins before a player is ever actively recruited or steps onto the UConn campus. It involves finding the kind of player who can be successful in UConn’s team culture. In addition to being exceptionally skilled and highly competitive, those who get invited to become part of this program have one quality in common: they are good teammates.

One of the ways the coaching staff determines whether a player has this quality involves watching the way she behaves when she’s not actually in the game. Even the best high school basketball players will get taken out of a game for a quick breather. It’s that time, while the player is on the bench, that coaches watch carefully. If the player throws a towel over her head and doesn’t remain actively engaged in the game for the brief time she’s on the bench, she is not likely to get the nod to come to UConn, no matter how many points she scores while she’s on the floor. This high schooler may be a great player, but she’ll have to play her college ball elsewhere.

A player’s bench-time activities may sound like a small thing, but it’s an indicator of something deeper – and while finding talented players who are committed first and foremost to being a good teammate is tough, for UConn, it’s been well worth it.

Whether you’re trying to win national championships or create the world’s best advertising, place a premium on hiring people who are committed to being good teammates.  It’s what the best teams do.  Best of all, it’s what anyone can do.

Leo Bottary is a sought-after thought leader on peer advantage, an emerging discipline dedicated to strategically engaging peers to realize your business and life goals.  His newest book is, What Anyone Can Do: How Surrounding Yourself with the Right People Will Drive Change, Opportunity, and Personal Growth (CLICK HERE to get your copy)

How frequently do you shift blame for mistakes you’ve made? Leadership Capital and Keys to Leading Effectively
Scroll to top