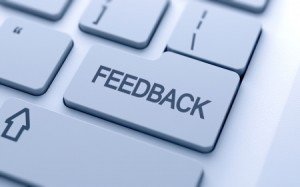 The following is an excerpt from One Piece of Paper: The Simple Approach to Powerful, Personal Leadership (you can get your copy here).  This post focuses on the importance of giving people the feedback they need to hear as soon as they need to hear it.

If you are committing to a team member’s growth you first have to give them the opportunity and then ensure that they do, in fact, grow.  The only way they will learn and develop in those roles is with coaching and feedback.  Giving feedback can be challenging.  Many times we nail the easy feedback when we say things like “great job on beating your goal by 37%!”  That is not a particularly hard message to deliver.  Such feedback is not remotely useful either.  There is no action being requested of the recipient.  Your job as the leader is to provide an observation on the recipient’s actions and give them ideas on what they might do better or differently going forward.  That is easy to do in a goal-beating situation but what about more difficult conversations?  Many of us avoid having them because they are uncomfortable, but when you ignore the problem it festers until those conversations turn into the “very difficult conversations,” then “extremely difficult conversations,” and eventually the “here’s your severance check and pink slip” conversations.  I know my gut instinct is to avoid these discussions at first but I also know it is my responsibility to have that feedback conversation as soon as possible.  I have adopted a maxim designed to hold me accountable for doing exactly that.  My maxim (principle or rule of conduct) to ensure I’m giving people the feedback they need is “It’s easier to correct course 100 yards into the journey than 100 miles into it.”

The maxim sounds good when you first hear it and it makes sense on its face but that is not enough.  A maxim must cause a visceral emotional reaction inside of you for it to be effective.  My story behind this maxim is about a time I mismanaged a member of my team.  Let’s call him Bob.  He was a well-intentioned and seemingly hard-working guy.  Over time, I began to hear feedback from members of his team that he could be rude, abrupt, and demeaning.  I would tell the person providing the feedback “thank you for sharing that with me.”  And then I did nothing about it.  I had a good relationship with Bob and I rationalized away the complaints.  I avoided a mildly uncomfortable conversation.

A few months later Bob did some analysis for me and the results seemed a bit odd.  His numbers did not jive with what I thought was going on in his organization.  He explained away some of the variances and errors.  The explanations he gave sounded like good reasons on their face but after some careful thought, those reasons did not make sense.  I let it go and rationalized it was not a big deal because in the grand scheme of things Bob was doing an okay job.  I was avoiding a difficult conversation.

Several weeks later I stopped by Bob’s office to ask him about another nonsensical set of numbers he had submitted.  As I approached his office I heard him yelling at one of his subordinates.  It was unavoidable to hear him berating this person.  The tone and words he used during the screaming bout were harsh and unprofessional.  I walked away from his office and told myself I would discuss the incident with him once he calmed down.  I never brought it up in our next conversation because it did not seem like the “right time” to do so.  I was ducking an extremely uncomfortable conversation.

The next month Bob came to me and told me he had a great opportunity at a new company and he was going to take the job.  My first reaction was “Oh no!  I’m losing a key member of the team and it will be hard to fill his role and get all his work done while I look for a replacement.”  My next reaction was “Whew!  He’s leaving which means I don’t have to have that awkward year-end review conversation with him.”  He took the new job and everyone was happy.  But not really.  Upon reflection I was quite disappointed in my spinelessness during those months.  I avoided a simple conversation where I could have established a performance standard.  I ducked increasingly difficult discussions and I subjected members of his team to mistreatment.  Ultimately my avoidance of the issue put the business at risk.  From a personal standpoint, I damaged my reputation and efficacy as a leader.  If his team members could not trust me to stand up for them after they came to me with complaints, who could they trust?  My behavior created morale issues and sent the wrong message to my people.

On my way home a few evenings later, I called a good friend of mine to have a chat.  I told him about Bob taking the new role and told him how disappointed I was in my failure to fix the situation much earlier in the year.  My friend listened attentively to the story and when I finished he said “Remember, it’s easier to correct course 100 yards into the journey than 100 miles into it.”  It was the swift smack upside the head I needed.  His words stuck with me and I adopted them as a maxim I still use to this day.  Since that conversation there have been multiple occasions where I have had to deliver some uncomfortable messages.  When that nagging avoidance instinct crops up, I remember this maxim and deliver the required feedback in a direct, constructive, and timely manner.  I have not had a single “extremely difficult” conversation since I adopted this maxim.  The emotional nature of the maxim and the reaction it causes within me spur me to action.  The actions I then take are the behavior changes required to make the maxim effective.  The positive results of those actions reinforce my use of the maxim and the virtuous circle grows.

You should regularly be looking for opportunities to challenge people on your team by putting them in situations where they can learn and grow.  Providing feedback and coaching is an integral part of helping with that growth.  You should also always look for opportunities to give feedback, regardless of whether or not it is around taking on new challenges.  I do not think I need to expound upon the importance of these points.  What I do need to emphasize is to the importance of doing these things on a consistent basis and not letting them fall by the wayside because they are hard.  The tornado of daily operations commands your attention.  Without a maxim to remind you to fulfill these other leadership responsibilities, you run the risk of not doing these things at all.  When that happens, you suffer, your team suffers, and your organization suffers.

What has your experience been with giving feedback either promptly or giving it too late?  Please share your thoughts in the comments below.

– If you’re serious about strengthening the connection between you and your team, grab yourself a copy of One Piece of Paper: The Simple Approach to Powerful, Personal Leadership. There are plenty of suggestions in there for how you can strengthen your relationship with your team members. CLICK HERE to get your copy.

Workaholic? 2 Easy Ways to Stop Working So Hard How well do you nurture your network?
Scroll to top