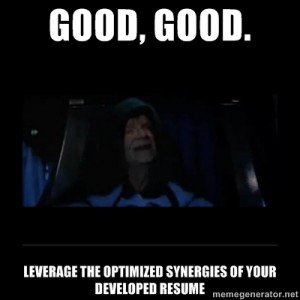 I’ve seen a ton of resumes over the years.  Some were awesome.  Some were okay.  Many sucked.  Flat out sucked.

Why do I say they sucked?  Typos, poor formatting, too long, too qualitative, too flowery, too boring, too nebulous.  I’ve written about resume writing mistakes and resume myths before so today’s post is written to complement those perspectives.

First, remember – all a resume does is get you a chance to interview for the job.  It does not get you the job.  That said, resumes can quickly eliminate you from contention in the first place if the resume happens to suck (see above for suck reasons).

One other big suck reason in addition to the ones above is poor writing.  Words matter.  If you’re boring, lazy, and unoriginal in your writing, the recruiter won’t even pick up the phone to extend an interview your way.  One of the most boring, laziest things I repeatedly see is the use of the word “develop.”  It is the most overused, useless word in resume writing.  Unless you work in the photo finishing section at Walgreens, you don’t develop anything.

Right now some of you are saying to yourselves “That’s fine Mike but I don’t overuse the word ‘develop’ – I’ve used it very sparingly in my resume.”  I’ll bet you a cup of coffee right now that if your resume is longer than one page that you’ve got the word “develop” in there more than four times.  And no – if the word is in your actual title (e.g., Director of Business Development) it doesn’t count.  Are you up for the challenge?  Open your resume in MS Word.  Hit CTRL + F.  Type in “develop” then click Reading Highlight then “Highlight All” and watch the yellow highlighting flow.  If it’s in there more than four times, please send $4.55 to my PayPal account – I drink quad shot venti caramel macchiatos (and if it’s in there fewer than four times, consider this free blog post as my payment for my end of the bet).

“But Mike, what words should I use instead of “develop” because I don’t know what else to say?

I’m glad you asked.  Here are 101 alternatives (along with 4 words that will immediately get your resume tossed in the trash by me and other mean hiring managers):

Bonus: here are three more words NEVER to use (in addition to “develop” because they are supermegabuzzwords):

1. Leveraged – unless you work on Wall Street at a derivatives trading desk or you’re a banker in a LBO shop or you’re a construction worker who uses 2×4’s to exert force to move other objects, don’t use this word.

2. Optimized – unless you’re a process engineer who changes multiple parameters in a system to maximize the system’s objective function, again, don’t use it.

3. Synergized – I just barfed in my mouth.

1. Annihilated (unless you’re Darth Vader, Emperor Palpatine, or Galactus, in which case, proceed).

What are your favorite words to use in a resume?  What are some of the dumbest or funniest ones you’ve seen?  Let us know in the comments below.

Problems Don’t Get Better With Age How Do You Help a Leader Lead Change When You are the Leader?
Scroll to top