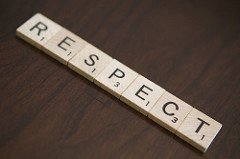 To get respect, you’ve got to show respect. Without respect, leaders become tyrants. Earning respect is easier than you might think.

Today’s post is by Dean Vella who writes on behalf of the University of Notre Dame and Bisk Education.

Imagine being a minimum-wage employee and working for a boss who consistently sits in his or her office, barking out commands. Whenever something goes wrong, the volume and vitriol from the boss increases.

Imagine having a boss whose sole management plan is to do as little as possible. A boss who makes empty promises of incentive rewards to employees who go the extra mile, promises that never materialize. A boss who refuses to relate to employee issues and needs, such as time off requests.

What if that boss approached work differently? What if he or she came in early and stayed late, offering to help with menial chores after closing in order to expedite the process and get people home earlier? Or simply took the time to talk to workers, to joke, to learn about them as people?

This situation, which centered on a series of restaurant managers, and was detailed by the website Respect and Leadership.net, sums up the toughest part of being a boss and a leader.

It’s the quintessential quandary of how to manage people and make sure they work to a certain standard, while also finding a way to make them respect you and your authority in order to help the business succeed.

Great leaders have to be respected in order to be successful, but earning that respect takes time and effort. When employees respect you, they are more likely to work harder to accomplish a shared goal they believe in.

Leaders recognize that employees are people, too, and they have basic needs that must be met and nurtured in order to enhance performance.

The Harvard Business Review examined those needs and determined through a query of more than 19,000 workers that most employees desire renewal, value, focus and purpose. Renewal can be as simple as giving time for physical rest. Feeling a sense of value can imbue an employee with confidence and stability in their job. More focused workers often achieve better results and get more work done. And imbuing a sense of purpose can graft individuals to an idea or a project by providing motivation and a feeling of contribution, either to a company or a cause.

Recognizing these needs as a leader might seem daunting, particularly in a large workplace, but taking action to address each need shouldn’t seem insurmountable. Often, such needs can be addressed individually. For instance, the Harvard Business Review found that workers who are encouraged to take occasional breaks were 50% more engaged, twice as healthy and more likely to want to keep working for the company.

In such cases, showing respect to employees’ needs earns respect for the boss, which is critical for a leader to succeed.

Leaders who earn respect often are much more successful than those who demand respect, and there are ways to achieve that tricky balance, according to the online magazine Inc.com.

By avoiding a leadership vacuum in which you ignore simple steps to creating a more productive, more satisfied workforce, you can achieve something more lasting than sales records.

The workplace of 2015 is far different than in years past. Younger employees don’t hold the same views of work and management as their parents did. Distrust and entitlement can be crippling traits to overcome.

That’s why it’s more important than ever for leaders to embrace their position and actually lead.

Forbes magazine highlighted five ways to do that, including some we’ve previously discussed.

Effective leaders set the bar for what they expect from their subordinates by doing and not just saying. They need to take risks and question the status quo. Just because one way has worked historically doesn’t mean it’s the only way to succeed.

They aren’t afraid to encourage the best and brightest to excel. They understand that they can help influence other employees to do better and do more by not ignoring their efforts and, instead, helping hone their talents to match their personal desire.

Great leaders are remembered for their impact on the organization in ways beyond the bottom line. They are role models that others seek to emulate. These are the leaders people remember fondly for the influence they provided that helped shape their own personal journey.

Leaders don’t need to take all the credit for specific victories. They know to share the recognition, often deflecting entirely to the hard work of the team.

That’s why they are picked to lead, and why people look to them as leaders.

– Dean Vella writes about topics related to leadership training and business management on behalf of the University of Notre Dame and Bisk Education.

How effectively do you resolve conflict with others? How much professional reading do you do each month?
Scroll to top