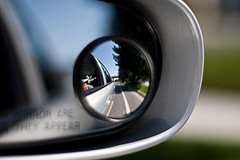 In September 2014, RadioShack announced that it may be closer to bankruptcy than previously thought. The venerable electronic retailer which opened its first store back in 1921 didn’t die overnight. Its slow decline matches the rise of online retailing, the competition from huge wireless service providers, and its failure to bring unique value to customers. All of these developments were obvious for more than a decade and yet RadioShack kept its same basic strategy in place until 2013.

What makes smart, informed executives cling to a strategy that no longer works?

Back in the early Precambrian era (circa 1994) I wrote a ‘pioneering’ book titled Business Blindspots. Business Blindspots refer to the failure of executives and their companies to recognize the (changing) competitive reality in their industries and in their markets until it is too late. (For a full treatment of the cognitive processes behind blind spots I urge you to read the excellent book by Nobel laureate Daniel Kahneman, Thinking, Fast and Slow). In a nutshell, the message is: Leaders can be lulled into believing they are well informed when they are not.


We all like to read about success. We devour the biographies of luminaries like Buffet, Jobs, Welch, Gates (and ironically also Iacocca and Trump). Unfortunately, in our search for “positivity,” we avoid learning from failures brought about by wearing “blinders.”

They’re Not All Bad, But When They Are…

As bubbles return and expand, and the stock market overflows with optimism, we need to focus for a minute on a cautionary note regarding blinders, and offer an alternative to going down with them on.

Most business decisions are good decisions. Most managers and executives know what they are doing, and they do it very well. They reason correctly, they keep watch over strategic issues, they produce profits, they adapt to changing environments. Otherwise, we would have the quality of life of the citizens of Mali or North Korea.

The problem is, when leaders develop blindspots, nothing works to save the company.

Why are blindspots so hard to eradicate?

There are several reasons executive blinders are so resistant to change.

– Behavioral economic research showed that telling the boss he has a blind spot will not achieve much. Execs can see blind spots in their subordinate’s thinking, but not vice versa!

– Most top executives in large companies don’t receive competitive intelligence. Objective intelligence input is critical in keeping leaders tuned to a deteriorating competitive reality. Instead, many executives receive filtered half-truths and confirmatory slides from their implicit “controllers” – their gatekeepers. Worse – many top executives don’t even realize the extent to which negative news and early warning signs are being “filtered out.”

– Very few organizations develop and institutionalize true strategic early warning capabilities (but even if they had, see the first point).

It no longer takes a colossal blindness to bring a firm down. Between 1982 and 2006 the average yearly dropout from the Fortune 500 list accelerated to 40 firms. And that’s even before the Great Recession hit.

What’s more, CEO’s tenure has been declining for a decade. About a quarter of the turnover is due to CEOs being fired. Blindspots fostered by a small circle of trusted advisors have more than a little to do with that. Leslie Gaines-Ross, chief reputation strategist at PR firm Weber Shandwick said “It’s easy to get a bit insulated at the top, so you have to pursue honest feedback.”

Competition is the chief reason firms go down and out of the Fortune list, and CEOs go in and out of the corner office. Competitive forces are inevitable, but the most destructive ones take a long time to emerge at full force. When they do, at last, it is too late. That’s why early identification is so critical, but early signs are the easiest to turn a blind eye to. The irony, of course, is that blind spots can’t be seen by those who have them. That’s why they are blind spots.

So, is there any positive message here?

Yes. Most of your decisions as a leader will be good decisions. However, if you surround yourself with a small circle of “trusted” advisors – consultants, investment bankers and peers – you are bound to go down with the lemmings. So here are some practical solutions:

– Allow yourself the luxury of listening to different perspectives on a regular basis (even if most will annoy you). If you are a leader, you’ve got to have your ears to the ground, and once in a while you may actually hear the train before it is too late.

– Institute a basic early warning process in your company. This shouldn’t be a massive investment in people or technology, but a lean, rigorous and mandatory review of the industry structural changes by a brilliant competition analyst aided by an informal community of same minded experts inside and outside your company. Your job may depend on that person developing a different

– Get out of your comfort zone – sponsor “war games” with your senior executives in which competitors’ and substitutes’ threats get honest airing. When senior people lead teams that role play competitors, you know you’d get the most compelling view possible of the competitive arena.

– Ask yourself constantly: What am I not seeing? If you like “leading by walking” start every conversation with team members with this question. If too many of them basically say “oh, your majesty, there is nothing that escapes you,” know that you are being snowed. And often, it is your fault.

– Invite controversial speakers to your management retreat. Andy Grove changed Intel’s strategy after listening to an outsider’s lecture. Make sure, though, that your invitation is personal and your event planners keep “hands off” that person. Otherwise, your handlers are going to make sure to censor, prepare or otherwise advise the speaker what not to say, and you won’t even know it!

– Above all, keep a humble attitude. Your success is due to your talent and your team, but it is also due to luck. If you keep reminding yourself that, maybe your blinders won’t cover your entire field of vision.

– Dr. Ben Gilad, considered a leading developer of competitive intelligence theory and practice, is a former Associate Professor of Strategy at Rutgers University’s School of Management. Gilad’s first CI books, The Business Intelligence System and Business Blindspots, paved the way for the CI evolution in US corporations. He is the co-editor of the definitive analysis book, The Art and Science of Business Intelligence Analysis, author of Early Warning, and Business War Games.

Do your team members focus on the positive or the negative? 7 Great Leadership Lessons in Less than 10 Minutes Each
Scroll to top