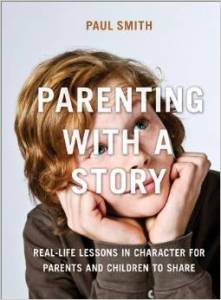 Today’s post is by bestselling author Paul Smith. It’s from his newest book Parenting with a Story: Real-life lessons in character for parents and children to share (CLICK HERE to get your copy). He’s also the author of Lead with a Story – the basis of our course on Influencing through Storytelling.

Renaissance artist Michelangelo once said, “The greater danger for most of us is not that our aim is too high and we miss it, but that it is too low and we reach it.” It’s echoed in the advice of many Western business leaders that it’s better to set lofty goals even if we don’t achieve them.

But of course, the kind of goals deemed worthy could vary over time and across cultures. In Asia, for example, setting lofty goals and falling short of them might not be what most leaders would call success. In fact, there’s an ancient Chinese saying that it’s “better to be the head of a dog than the tail of a lion.” Let’s look at how that value might play out in someone’s life and career, and then you can decide which is right for you.

Junichi Endo grew up in Saitama City, Japan, about twenty miles north of Tokyo. Like every other student, when he entered O’Hara Junior High School he was encouraged to join one of the extracurricular clubs on campus. Junichi loved baseball in elementary school, so that’s what he signed up for. It’s important to understand that in Japan, baseball was the most popular sport among boys his age. So it attracted the best athletes in the school. The good news was that thirty boys were allowed to join the team, including Junichi. But since only nine can play at any given time, earning a starting position would be difficult. The other thing he discovered was that the first-year players had to collect the senior players’ balls and equipment after practice—something of an initiation ritual.

By the middle of his first season, Junichi had racked up lots of time running drills and picking up after the other players. But he hadn’t seen any actual playing time. That honor went to boys who were bigger and could hit and throw the ball farther. That left Junichi in a quandary. He loved baseball, but he didn’t relish the idea of two more years of sitting on the bench. He was also painfully conscious that in Japan it was considered shameful to quit anything in the middle once you’d decided to do it. He talked to his coach and one of his teachers about his dilemma, and both encouraged him to stay on the team. Despite that guidance, Junichi decided to quit baseball and join the tennis team.

Because tennis was not as popular as baseball, the tennis team only had about ten players. And relative to the baseball team, as Junichi described it, “its performance was quite weak.” But since tennis required more technique and skill than it did power, it suited him better, and his skill grew quickly. His second year he was even elected captain of the team. In that position, he was able to influence the practice routine and tournament schedule. He made adjustments to the training schedule to make the team stronger and added several practice tournaments.

By his third year, his team advanced all the way to the final round in the city tournament and won second place. That meant that for the first time in the school’s history, the tennis team had earned a berth in the district-wide tournament. As for the baseball team that year, in their city tournament “they lost in the first round.”

For Junichi, his time on the tennis team was the greatest experience of leadership he’d had at that point in his life. And it was one he would have almost certainly not had if he’d stayed on the baseball team. That leadership lesson was to become one of many that stayed with Junichi in the decades since and helped lead to many successes. In 2005 he became the youngest senior vice president in the history of Nissan Motors. And now he is the president and CEO of NMKV, a joint venture between Nissan and Mitsubishi, two of the largest and most prestigious Japanese firms today.

It turned out that spending time as the head of a dog in junior high school tennis helped Junichi today become the CEO of a lion.

– Paul Smith is a bestselling author who’s newest book, Parenting with a Story, documents 101 inspiring lessons like this one to help you, and your kids, build the kind of character anyone would be proud of. He’s a former director of consumer research and 20-year-veteran of The Procter & Gamble Company. Today he is a thoughtLEADERS instructor on leadership through storytelling based on his bestselling book Lead with a Story: A Guide to Crafting Business Narratives that Captivate, Convince, and Inspire. You can ﬁnd Paul on Twitter as @LeadWithAStory.

3 Steps to Hating Your Job Less How often do you overcommit yourself and your team?
Scroll to top