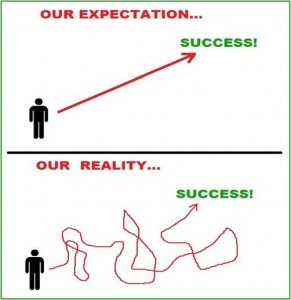 Today’s guest post is by Sean Glaze, an expert in team-building and coaching. You can read more about him at the end of the post. Here’s Sean…

As a basketball coach, I used to talk to my team about the importance of the straight line drive when we focused on offensive team development.

The idea is to get your ball-handlers to attack the basket without making a “banana cut” that might allow the defender to recover and get back in front of the ball.  Once you beat the man with your move to the rim, your job is to go in as straight a line as possible.

Obviously, all defenders are normally taught to push out all drives as wide as possible and to get the ball to move further to the side instead of in a straight line to the goal.  The team who most often won that battle of straight line drive attempts usually won the game.

People too often believe that success is a straight line drive.

They want to assume that you start at point A and go immediately to point B without the distraction or bother of anything other than a direct path.

But success is not found by traveling a straight line drive.

Success and happiness are most assuredly found more often on the back roads and side roads and along the way from your starting point to your destination as part of what will likely be a very interesting, unexpected, and winding path.

Those who have experienced success with athletic teams, or in business, or in their classrooms will most assuredly agree that the joy of success is found in that journey.

Great teachers know that telling a student something is not teaching them.  Simple lectures are rarely digested and seldom internalized by classes – and although they are the straightest line between ignorance and knowledge, they are not the best way to educate.  Experiences and connections and relationships and application of ideas are what educates.  Lectures, or straight line drives, are often a waste of time and seldom result in actual learning.

Similarly, your success with team development as a business or athletic organization depends upon your willingness to accept what may seem to be counter-intuitive principles.

First, instead of talking to your team about the project they are responsible for, you will make more progress both relationally and professionally by asking them about themselves and their family, not about the project.

Learn to take the scenic route in your teamwork travels, and the journey will take you to the destination you have identified far faster and more happily than any highway.

First – if you will accept that it is your job to join their team before you expect them to commit to your team, you will always have a loyal and hardworking group.

Next, you should realize that, in team development, you gain power by empowering others.  Instead of hoarding all responsibility and recognition for yourself, by learning to share it with others you actually improve your own standing and reputation.

And finally, be ignorant more often.  Instead of feeling the need to know everything and do everything well and be the source of all great ideas, let yourself be less of a sage and more of an encourager who draws out the ideas and talents of the people that surround you.

The less you talk, the more you will learn about the insights and creativity of the people that are on your team and likely now being overlooked.

Yes, the common expectation is that we run toward success in a straight line.

But team development in the real word is more about allowing yourself and your people time to take the scenic route and enjoy the unexpected moments of insights that become your journey of discovery.

Outside of the basketball court, people don’t really function in straight line drives.

People need the time and opportunity to experience unexpected teachable moments and spend time building relationships with teammates and take wrong turns and learn from mistakes.

Straight lines don’t allow for the behavioral discomforts and personal growth that your people gain through interactions with other team personality types when they actually collaborate instead of seeking the most expedient route.

True collaboration and teamwork takes time and energy, and it is decidedly non-linear.

As a leader, I encourage you to allow your people the time and opportunity to learn about each other – whether it is a structured teambuilding event or as a collection of “unstructured” times during each month where they can experience and grow on the back-roads of life.

That is honestly where most growth, team development, and creativity actually occurs…

Do you have an example from your life that applies to this?

– Sean Glaze has enjoyed motivating athletes and inspiring teams for nearly 20 years, and has consistently turned under-achievers into winners – both on and off the court – with his practical tools and focus on great relationships and team-building.  As an experienced author, speaker, and team-building coach, Sean entertains and influences audiences with a unique blend of dynamic content, interactive activities, and practical action steps. Learn more about him here: www.GreatResultsTeambuilding.net.